Just in time for Halloween….you can play my version of Spooky at your party or as background music as you open the door for Trick or Treaters.

You can download your copy at CD Baby by clicking this link.   Also here is the video. Or you can watch it on YouTube.

This is my instrumental version of Spooky…..arranged, performed (Yes, that’s me playing electric guitar, string bass, keyboard and synthesizer.) and recorded by me. Spooky was a billboard hit for the group Classics IV in 1968 and then again in the late 1970s for the Atlanta Rhythm Section (ARS). Spooky however, was originally composed by Mike Sharpe (Shapiro) and recorded as a saxophone jazz instrumental.

Per Wikipedia, “Mike composed the tune along with help from Harry Middlebrooks and recorded the song at Liberty Records. The Mike Sharpe version of Spooky peaked at #57 on the Billboard Pop Hot 100, which was pretty good for a Jazz group. The Classics IV version of the song added lyrics which we all associate with the song and as a single it peaked at # 3 in the US as a pop single.

In 1979 ARS covered the song and released it on “Underdog”, and according to the album’s entry on Wikipedia, “The album contained two songs which reached the top 20 of the Billboard Hot 100 singles chart. 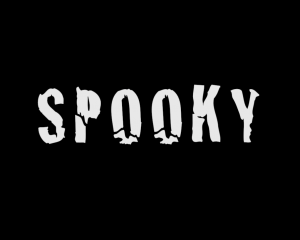 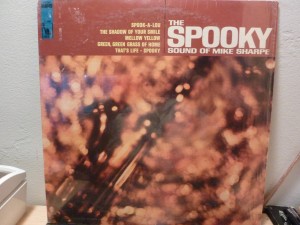 Continuing on from the last post, here are three Major 7 and Major 6 type chords with the root note on the 6th string, or low E string on the guitar.  Major 7 chords do have a distinctive “jazzy” sound, so they will make you sound cool instantly.  Be sure to notice that you must mute the 5th string with the tip of your first finger and the 1st string with either a finger or part of your hand .  The Major 6 chord requires that you bar the notes on the 4th and 5th strings with your 3rd finger.  And the only difference between the Major 6 and Major 6/9 chords is that you add the 9th with your pinky (4th finger) on the 1st string.  I have also shown an alternate version of the Major 6/9 chord that was taught to me by my friend Michael Powers, which is much easier in my opinion to finger.  You will note that I have intentionally not included which fingers to use in the chord diagrams so that you can figure out what works best for you since everyone has different sized hands and fingers and abilities. 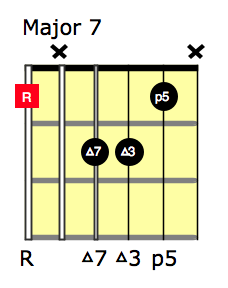 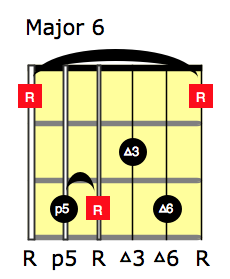 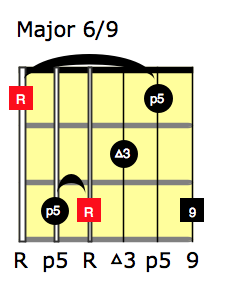 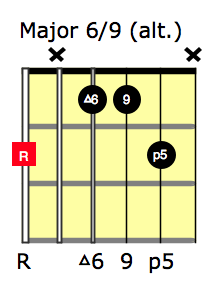 I’ve started trying to learn some jazz.  So here are a few jazz guitar chords that I have been working on this week.  Of course, the first major chord is not just a “jazz” chord, but is widely used, but for a basic major chord with a 6th string root, it seems to be about the only option.  I will post some more next week, assuming I survive this sinus infection that decided to make my head its home for the time being.  For now I am concentrating on chords with a root note on the 6th string (low E) on the guitar.  The legend below the chord diagram provides the interval for note on each string, such as R for root, p5 for Perfect 5th, etc.

What are some of your most useful jazzy chords?

Also, I need to emphasize that I am not a jazz musician….only that I find it fascinating and it is an awesome way to learn chord theory.  I think to be a true jazz cat you need to give it full time study and my interest lies in too many other areas and I just don’t have time to devote full time effort. 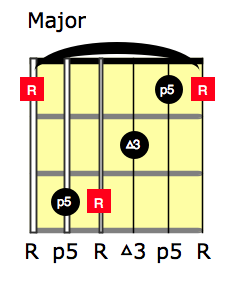 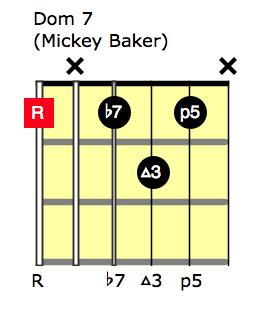 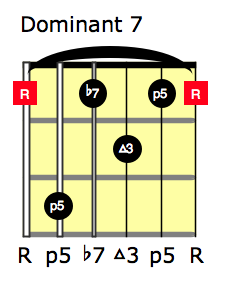