Freddie King has become one of my most favorite electric blues artists!  Before I did a deep dive into the blues I was aware of his name, that he existed, but that was about it.

But after I discovered his music I was hooked.  And the more I learned about him as a person, the more I liked him.  “The Texas Cannonball.”  Man, could he groove.

Freddie was born in Gilmer, Texas in 1934 and his birth name was allegedly Frederick Christian, but I have also read that it was Fred King. Later when he began recording, at first he went by “Freddy King” and ultimately he changed to “Freddie”.  In 1949 his family moved from Texas to Chicago where he began his rise in the Chicago blues scene sneaking into clubs when he was still a minor.  He had a very unique guitar technique and sound.

Freddie played various Gibson guitars….a Les Paul and several semihollow body Gibsons with a thumbpick and a metal fingerpick on his index finger, which gave his guitar a very biting tone and from the videos I’ve seen he often played through a huge Fender amp, maybe a Fender Quad Reverb.  I don’t know a lot about Freddie’s band members over the years other than Sonny Thompson who played piano and cowrote some of FK’s songs and Freddie’s brother, Benny Turner, played bass with Freddie for many years up until Freddie’s death and Benny is still alive and still playing music.

Freddie was a big man, standing about 6’5”.  Unfortunately, he died way too soon at the young age of 42 on December 28, 1976 from complications from various ailments:  heart attack, stomach ulcers and pancreatitis, probably brought on from poor nutrition and heavy touring.  What a loss to the blues.

In 2012, Freddie was finally inducted into the Rock & Roll Hall of Fame by none other than ZZ Top.

I located the following from the website Find a Grave

He was born Freddie (spelled Freddy in the early days of his career) Christian in Gilmer, Texas, in 1934. Early on, he played in a Lightnin’ Hopkins acoustic style, having learned the rudiments of guitar playing and old time blues standards from his mother and uncle. He moved to Chicago in 1950, and fell in love with the blues being played in his new hometown and vowed to become part of the scene. Influenced by Robert Jr. Lockwood, Jimmy Rogers, and Eddie Taylor, he formed his first band “the Every Hour Blues Boys” and began working his way into the highly competitive club circuit. By the mid 1950’s, Freddie King had adopted the surname King (because of B.B.’s success, just as Albert King had done) and got his first shot at recording in 1957, when he cut “Country Boy” for the microscopically small El-Bee label. But the record flopped, and he wouldn’t record again for another three years. Later, in 1960, he signed with Federal Records in Cincinnati, releasing “You’ve Got To Love Her With A Feelin'” with pop chart success. Later in 1961, he released the instrumental “Hide Away” which was his biggest hit. Freddie King’s influences can be heard in playing styles of Eric Clapton, Lonnie Mack and Stevie Ray Vaughn, amongst many other blues artists.

I hope you are staying safe and healthy during these crazy times after a virus has turned the whole world upside down.  You might even be feeling a little bit blue. I know I have felt that way more than once!  Before this coronavirus unleashed itself on the world I was already getting blue……into blues music that is, so the timing of this world situation is ironic.  Anyway, I’ve found blues music to both acknowledge pain and misfortune, but also bring hope and joy.

The blues has always fascinated, captivated and resonated with me.  My friend Michael, when hearing me say that told me, “Well, yeah, it’s just good music.”  That’s definitely true.  It’s got groove, feeling and truth.  And in spite of it being “blue” I think there is a happiness and sense of hope that is entwined with the blues.

I grew up in Fort Wayne, Indiana and spent a significant amount of time visiting relatives in Chicago, one of America’s blues powerhouse cities.  Fort Wayne is also not far from Detroit, the home of much awesome R&B music put out by Motown.  So I was steeped in this wonderful sonic brew by virtue of just being there.

I think the blues touches something in all of us, no matter our ethnic or economic background.  Everyone goes through trials and tribulations, hope and disappointment of one form or another.  And to me, the blues is one way of dealing with that and connecting it to something universal – music – as a way to work through it in a therapeutic way, even if you don’t realize it.  Music is therapeutic.  But besides all of that, it’s just plain fun.

And recently, because of my ongoing attraction to the blues, and a desire to learn more deeply about some of the primary blues artists, and needing to start somewhere since there are so many artists and styles I decided to begin with “the kings”….BB, Albert and Freddie.  I’m also a big, big fan of Eric Clapton and Stevie Ray Vaughan and I knew that the kings were big influences on EC and SRV.

Having said all of that, stay tuned for more as I venture down this blue highway!

Don’t forget to wash your hands!

Stop and Smell the Flowers

Just stopping by to share some happiness with you all during this serious time that we are stuck in at the moment.  While I’m sure that eventually this will pass and life will return to normal, I think it’s important to find the positive things in the situation that we are in.  I hope that during these days we can focus on those closest to us – our God, our spouse/significant other, children, family and close friends – and appreciate them.  God has given us the opportunity……don’t forget to stop and smell the flowers.

It’s been a while since I posted. I’ve been kind of busy running my full time, non-music, day-job business. I was also busy this past year doing something new: Composing and arranging a piece for full orchestra:  The orchestral release of Mary’s Gift Symphony

The project kicked off over a year ago.

I Decided to write a piece for full orchestra inspired by my song Mary’s Gift, which is a song about the miracle of the first Christmas.

I sketched out the structure and wrote the initial harmonic arrangement on the plane while flying to Europe and back and fleshed it out over several months afterwards.

Mary’s Gift begins with a timpani roll and cymbal crash symbolic of the arrival and appearance of the Archangel Gabriel to Mary. But after this angelic entrance heralded by the timpani, the violins come in pianississimo and crescendo followed by a solo flute as Gabriel speaks gently to the virgin Mary.

Then the entire violin section plays and begins telling the story of the Holy Family and the Nativity. As the music continues the telling of the story rotates among each section of the orchestra.

To my delight and honor, Mary’s Gift was played live this past December by the Evergreen Community Orchestra!

Since then, I have been able to publish the conductor’s score and instrument parts with Sheet Music Plus. So….If you are interested in having an orchestra that you are involved with play Mary’s Gift, you may purchase the complete package over there at Sheet Music Plus. There is an MP3 plus a video of the music playing as it scrolls through the score.

Next, I will play for you a synthesized version of Mary’s Gift for orchestra. You can also catch this on Spotify, Apple Music and other digital music distributors.

Links to all of these places are in the show notes below.

Thanks for listening and I’ll talk to you next time! 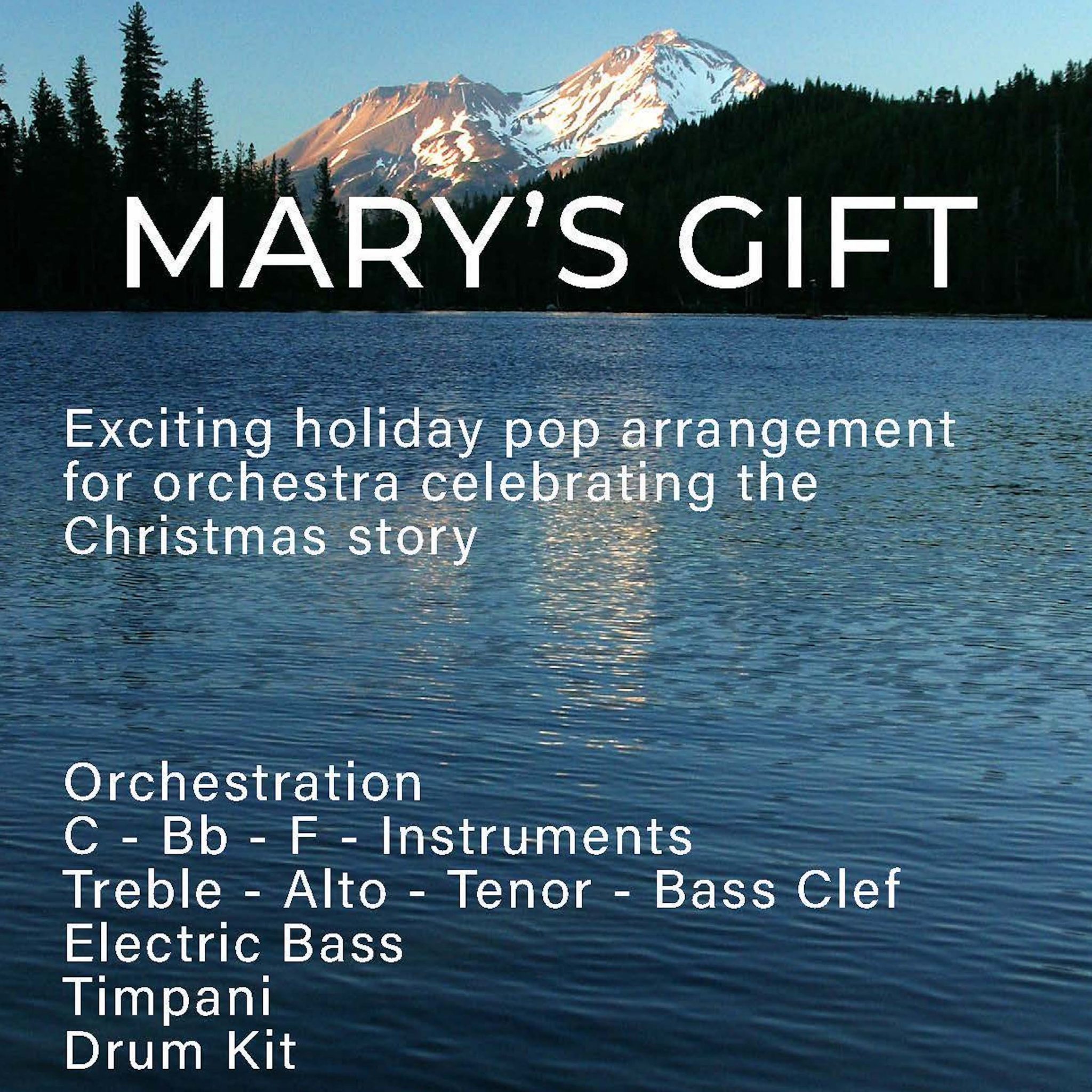