We spent the afternoon today enjoying the wonderful sounds of George Fredric Handel’s “Messiah” filling the air of the Linda M. Byrnes Performing Arts Center in Arlington, Washington.  The chorus and the orchestra were led by Lyle Forde and composed of all volunteer community members.  Besides the community choir, the program features the Overman Family Musicians who also composed a large percentage of the orchestra with a family member in almost every section.  For a suggested admission fee of $5.00, we received a lot of bang (as in timpani) for the buck.  Besides the complete Messiah there were also performances by a young women’s chorus and an audience sing along of well known Christmas carols.  We had been considering spending the coin to go to see the Messiah concert at Seattle’s Benaroya hall, but considering the ticket prices, parking fees and the hassle of driving into the city, we opted for this instead and we were not disappointed in the least.  The singing and the playing were top notch.  I highly recommend attending this next year if you want to attend a performance of Handel’s Messiah. 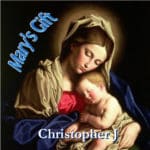