This is to let you know that I will be off-line for a little while. On Thursday, May 20, 2010 I will be having a craniotomy surgery. I do not have cancer, but this is still a major operation, I will be in the hospital the better part of a week and recuperating for 3 to 6 weeks. They will be repairing a “superior canal dehiscence”….basically they discovered that I have a hole in my skull base allowing my brain to be exposed to my inner ear which has been causing me dizziness issues and hearing loss. 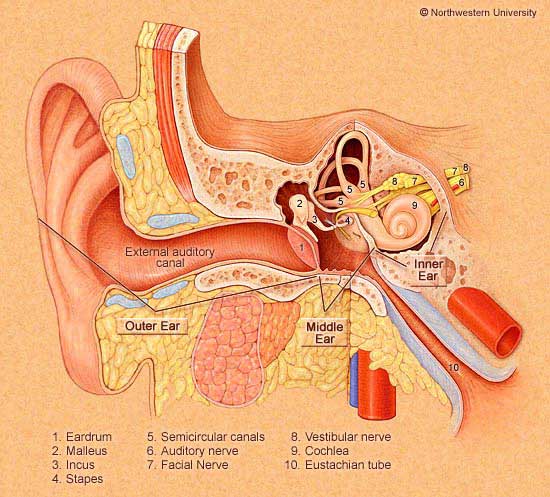 Over the past 5 to 10 years I began to experience hearing loss in my left ear. I first noticed this when I realized I was not hearing my clock radio in the morning and it was more than willfulness to play hooky. This condition caused me a lot of frustration as a musician as I began to have trouble not only hearing external sounds but it was becoming hard to hear my own pitches internally. I could not figure out what was wrong at first. I kept thinking, “What is the matter with me that I can’t find these pitches when I want to!?” On top of that I began having other strange symptoms like if I heard a loud sound or sang very loud myself my left ear would “reverberate” or kind of jangle and echo, but not my right ear. Loud sounds would also make my left ear ache very badly and radiate out around the side of my face. Besides these hearing issues I had other odd things that would go on….for example if I called someone on the telephone, as the phone rang in my left ear my eyes would vibrate and whatever I was looking at would shake in synch with the telephone ring! But this shaking only happened with the phone on my left ear and not my right. I was never sure why that happened, I thought it was kind of strange, and I wondered if everyone was like that. LOL! To top it off, I often ended up feeling dizzy and losing my balance and if I squatted down to look at something or work on something for a minute or two when I stood up I would get very dizzy and at times felt like I was going to pass out. I did not know what was wrong or why an otherwise very healthy guy would have such weird and annoying things going on.

But the most annoying thing was the hearing loss. Since music means the world to me, I was determined to find a way to restore my hearing. So I began getting hearing tests to try to discover what exactly was causing the hearing loss. The hearing tests showed that my mid and high frequency hearing was very good for my age, but I had a 35-40dB low frequency loss on only my left ear. This is called a “conductive hearing” loss because the middle ear bones which conduct the sound waves to the inner ear were not working correctly, so they thought. There are surgical repair techniques available to fix the problem and restore the conduction path, but when this was first discovered in me my ENT told me that it was too early to consider surgery for me and that they would need to observe me for a few years and retest to determine if the condition had stabilized or was continuing to worsen. In the mean time, they suggested that I try a hearing aid and see how I liked it.

I tried the hearing aid beginning in 2007. At first it was very embarrassing for me to wear in public. Call me vain! But once I got used to it, it was a mixed blessing. It did increase my hearing ability, but its ability to discriminate sounds was limited and especially in public, loud environments it was very hard for me to separate a person speaking directly to me from all of the background noise. So, I was on again, off again with the hearing aid for a while.

Finally, early this year I decided to try to seriously pursue the surgical repair technique. I went back to see my ENT again. He retested me again. We agreed I finally was a candidate for a stapedectomy procedure. But…..he said my test results were not exactly textbook….something was not quite right….so he decided to refer me to the absolute best otolaryngologist in Seattle. Well, to make a long story a little less long, he determined that my conductive hearing mechanism (middle ear) as well as my inner ear is just fine (that was the good news) but a specialized CT scan of my head discovered I have a hole between my inner cranial space and my inner ear allowing my brain to bump up against the vestibular canals of the cochlea acting as effectively as a “mute” (musicians should get this concept) as well as screwing up my vestibular system.

So anyhow, to correct this they will be performing a “middle fossa craniotomy” procedure to go in and patch the hole. (My dad used to ask me if I had holes in my head…) Essential, they will go in through my skull, move my brain over out of the way and repave the bottom of my skull. (technical terms) But they claim they have had 100% success on the folks that have had this surgery and no adverse events. The medical term for my condition is “left-sided superior canal dehiscence”.

Here are a few cartoon pictures to give you a general idea of what they are going to do to me!

The last picture shows a neuroma on the vestibular nerve, which I do not have…the neuroma, not the nerve…I am missing a piece of bone over the superior semicircular canal.

I will be having the craniotomy surgery on May 20th and will get to enjoy hospital food for most of that week. We have prayed about this and turned it over to the Lord. May he guide the surgeons’ hands. I have two top notch surgeons who will operate on me: A neurosurgeon and an otolaryngologist.

I hope I get a room with a view. I plan to be healed up and back to a normal routine within about a month after surgery. Life is too short, there is simply no time to waste!

More information than you ever wanted to know on superior canal dehiscence can be found at the web site of Dr. Timothy Hain (http://www.dizziness-and-balance.com/disorders/unilat/scd.htm). For the Über curious among you, a video of the surgery can be found here: http://www.otosurgery.org/sscd_surgery.htm

Thanks for your prayers and good wishes.

Finally, after the SCDS surgery and losing my hearing I began recording again.  Here is a link to a tune that is the first number with singing that I have recorded.  Nacho Mama!  Please Click here to check out the rest of my music!  Thanks! 🙂